Zee Entertainment Enterprises and its largest shareholder, Invesco Fund, are headed for a showdown with Invesco insisting the board hold the extraordinary general meeting (EGM) before going ahead with its merger deal with Sony’s India unit.


ZEEL board has three weeks to call the EGM. If it fails to do so, Invesco can call the meetings within six months. Legal experts said with both camps rigid on their positions, it might lead to a legal battle.

In a letter dated September 23, Invesco and Oppenheimer Funds asked ZEEL to adhere to its fiduciary duties and not violate its statutory obligations to convene the EGM as requisitioned by Invesco on September 11. “We urge the board to reflect on this communication and act in the best interest of the company, its public shareholders and uphold the highest standards of corporate and board governance,” the fund said.


In its earlier letter, Invesco had asked the company to oust current Managing Director and Chief Executive Punit Goenka and induct six of its nominees on the board. But within days, Zee announced a merger deal with its rival Sony Pictures, creating a $2-billion revenue company with a 25 per cent market share.


A ZEEL spokesperson said: “The board is seized of the matter. The company will take the necessary action as per applicable law.” The “letter bomb” by Invesco is expected to rattle the Zee board as they will have to take it on record and either accept or reject the requisition.


“If ZEEL rejects the requisition, it may lead to a legal battle,” said an expert. In its letter, Invesco said it has been an investor in ZEEL for over 10 years and continues to believe that ZEEL business is valuable, whether on its own or in strategic alignment with partners such as Sony. The letter has been reviewed by Business Standard. 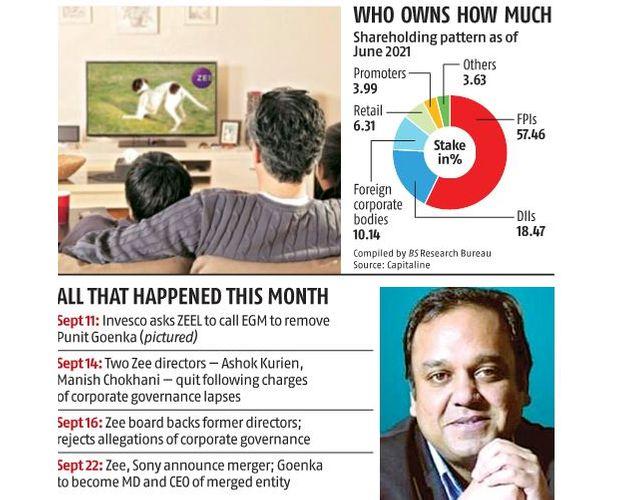 “However, decisions of material strategic import must follow and not precede actions towards establishment of a proper and independent governance structure as determined by the company’s shareholders. In this context, and against the backdrop of our EGM requisition, your disclosure of September 22 is symptomatic of the erratic manner in which important and serious decisions have been handled at the company,” it said.


Invesco said to protect shareholder value and in the exercise of its statutory rights as an ordinary shareholder, it had called upon the company to hold an EGM, and it was the board’s duty under company law to do so. “At this EGM, shareholders will decide the composition of the board of directors in a free and democratic manner,” it said.


“Together with the existing set of independent directors, we believe the board will have the depth to navigate the company into the future. A newly constituted board supported with the strength of independence will be best suited to evaluate and oversee the potential for strategic transactions, like the one announced on September 22 on a non-binding basis, as well as to make determinations on the future leadership of the company,” it said. “We note that the disclosure of September 22 refers to the future board composition of the company at a time when the current composition of the board is subject to a shareholder vote on the back of our EGM requisition,” it said.


Two of the independent directors, Ashok Kurien and Manish Chokhani, had quit the ZEEL board just before the AGM following charges of corporate governance lapses made by two proxy advisory firms.


The Zee promoters list control of the company after they defaulted on bank loans taken by promoter entities. As the shares of the listed entities like Zee and Dish TV were pledged with lenders, the promoters’ stake in both companies fell to low single digits. Last week, YES Bank, which holds 26 per cent after invoking promoters’ pledge, asked Dish TV to call an EGM to induct six of its nominees on the Dish board and remove Jawahar Goel, CEO of Dish TV.


The Sony deal will make sure that the Subhash Chandra family will hold 4 per cent in the merged entity and Goenka retaining his job. The proxy advisory firms had said Goenka’s salary in the 2020-2021 financial year had gone up when the rest of the employees received zero raise.