Despite strong Q1 results for the 2022-23 financial year (Q1FY23), gas marketing and trading public sector enterprise (PSU) GAIL saw a sell-off. The company reported Rs 37,572 crore in revenues, earnings before interest, tax, depreciation and amortisation (Ebitda) of Rs 4,365 crore, and profit after tax (PAT) of Rs 2,915 crore. Revenue was up 116 per cent year-on-year (YoY) while Ebitda was up 81 per cent YoY although the Q1FY23 margin of 11.6 per cent was down against 13.9 per cent YoY. The PAT was up 90 per cent YoY. Sequentially, revenues were up 39 per cent and Ebitda was up 17 per cent, but there was 2 per cent drop in margins and PAT was up 8.6 per cent.


Segment-wise, gas trading saw a sharp jump in profitability but the transmission segment has seen a setback. Gas trading Ebitda was higher at Rs 2,400 crore in Q1FY23 versus Rs 1,780 crore in Q4FY22, which was driven by strong LNG prices. The trading margin jumped to Rs 2,618 per tcm (thousand cubic metres), up quarter-on-quarter (QoQ) from Rs 2,088 per tcm, and volume was also higher at 100.8 mmscmd (million standard cubic meters per day). But transmission Ebitda was lower at Rs 1,090 crore against Rs 1,150 crore in Q4FY22 and the transmission margin was lower at Rs 1,094 per tcm versus Rs 1,180 per tcm while volume was at 109.5 mmscmd. 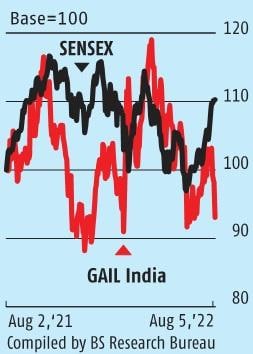 The management guidance was that current gas trading and transmission volume will be lower by 5-7 mmcmd due to disruption in gas supply since June 2022 from Gazprom where GAIL has a 2.5 mmtpa LNG supply contract.


GAIL’s petrochemicals sales volumes fell by 50 per cent QoQ due to plant maintenance shutdown. The segment Ebitda was at Rs 170 crore, down 66 per cent QoQ, with petrochemical spreads dropping due to lower volumes and higher cost.


The management guidance includes a commitment to continue capex including Rs 47,000 crore for pipeline expansions and it will increase petrochemicals capacity. It has Rs 7,500 crore of capex scheduled for this fiscal. It has a strong balance sheet with very little debt so this is comfortable.


Obviously the sector dynamics are driven by geopolitics with the Ukraine War dragging on and leading to volatile prices and fears of supply disruption. GAIL has contracts of 36 cargoes in the calendar year 2022, but since May 2022 it has got 8 less cargoes. It is trying to bring forward US cargoes given the probability of lower gas supply from Russia. It may be forced to cut back on the petrochemicals segment even after the full capacity is back online, if gas supply is lower.


The positive assumptions are that high gas trading earnings will be sufficient to more than compensate for the weak transmission segment. Note that GAIL has significant investments in other listed and unlisted businesses downstream which add up to Rs 50 per share to the SOTP (sum of the parts) values. The long-term prospects should be good given the government policy encouraging gas usage to cut emissions.


The share price dropped from Rs 140 to Rs 132 with the market showing nervousness about the possibility of supply disruptions in the sector. However, analysts remain positive about the sector with valuations ranging between Rs 176, Rs 190 to Rs 197 from various analysts.

How to join a Twitter community for your business